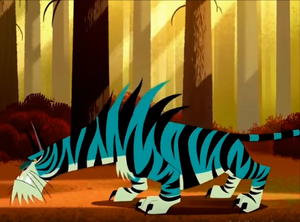 Alien Tigers are an extraterrestrial animal species that were introduced to Earth. They resemble tigers or other big cats from Earth, except they have teal fur with black stripes, long snouts with many sharp fangs, two clawed toes on each foot, long tails that they can use like whips, and they have green blood.

Three of these creatures attempted to hunt and kill a lone wolf that was passing through a forest. After a fierce battle, both the tigers and the wolf were seen laying in a pool of blood. However later the same wolf was encountered by Jack, revealing it survived. It is unknown how the past Aku's destruction affected their existence in the future.

Retrieved from "https://samuraijack.fandom.com/wiki/Alien_Tigers?oldid=33636"
Community content is available under CC-BY-SA unless otherwise noted.