Aku (Their "God" and father)
The High Priestess (mother)

The Daughters of Aku were a group of seven human-demon hybrid women who were born and raised by their mother, the High Priestess, for the sole purpose of killing Samurai Jack. They are from a cult dedicated to Aku and appear during the events of Season 5. As of Episode XCV only Ashi was confirmed to be alive. It was confirmed in Episode XCVIII that all the Daughters minus Ashi did indeed perish by Jack according to the High Priestess. In Episode C it was revealed they were indeed the daughters of Aku with their mother having taken the essence of Aku and birthing them.

After Jack and Ashi time-traveled into the past shortly after Aku originally hurtled Jack into the future, Jack finally triumphed in destroying Aku. With his demise in the past, Ashi (and presumably the rest of her sisters) are rendered non-existent and thus were never born.

Being septuplets, they all shared very similar physical traits consisting of black hair, narrow eyes and what appeared to be pitch-black latex-like suits. It is later revealed that their "suits" are in fact solidified tar as result of being pushed into a hot, tar-like substance from the Pit of Hate by their mother.[1] The only distinguishing trait among them is their varying hairstyles. When out on their mission, they wear white masks with black horns made to resemble Aku's.

The seven daughters were birthed by The High Priestess of an all-female cult of Aku after she consumed Aku's essence. After birth, the priestess had them raised as assassins to succeed where many others have failed in the mission of killing Jack. They were put through the most brutal of training, designed to sculpt them into the ultimate ninja warriors, such as facing a hulking, muscle bound opponent when they were mere children. Even more, they have been utterly taught to think that Aku is the true savior of the planet and Jack seeks to destroy all that Aku has "created". When their training was complete, they donned their masks and head coverings and set out to fulfill their mission. (Episode XCII)

They eventually found Jack and proceed to lay a trap after he deals with a large Beetle Drone. They manage to destroy or steal most of his equipment and armor but the Samurai is able to escape their grasp briefly using explosives and flee towards an abandoned temple. After a long search the sisters manage to locate him and engage in a running battle with him throughout the temple. Eventually one of the Sisters manages to corner and wound Jack, but at the cost of her life, a fact that leaves Jack horrified as he realizes he has been fighting a living human being instead of another machine as he had initially thought them to be. After snapping out of it, Jack then manages to escape them again by recovering the tuning fork blade he took from the assassin Scaramouch from the now dead sister who stole it and used it to seal the temple hallway behind him as he jumped into the river below. (Episode XCIII)

While Jack recovered from his wounds, the Daughters broke out of the ruined temple and continued the hunt for Jack, leaving the corpse of their dead sister behind. Following the river to the forest, the sisters spent a moment observing a female deer in the woods, mistaking her mate for one of Aku's minions due to its antlers. After one of the Daughters scared the deer off and it began to snow, Jack revealed his presence to them. He offered them an ultimatum: Leave, or face their destiny. When the Daughters refused and rejected his words of wisdom, Jack emerged from his hiding place in the snow and impaled one of them with a wooden spear. Jack then proceeded to dispatch the rest of the daughters until only Ashi remained, hanging from a fallen tree over a valley. Ignoring her threats about Aku, Jack simply unwrapped her kusarigama from his arm, sending her to her presumed death. Unfortunately, the tree finally collapsed from the fight and Jack followed her into the valley below. (Episode XCIV)

The daughters of Aku were erased from the timeline since Ashi and Jack altered the future since the defeat of Aku in the past. (Episode CI)

All seven sisters were trained rigorously for all of their lives to become ultimate assassins, solely to kill Jack. As a result, they are not only highly skilled in the art of assassination but also void of emotion, shown in how they pursued Jack effectively and unflinchingly even after one of their own died, being raised to believe that "death is failure in the eyes of Aku". After years of training, the daughters of Aku became very tactical and analytical, as seen when they strategically stripped Samurai Jack of his armor and weapons during their first encounter. The depth of their training and skill is further revealed during their attempts to kill the Samurai, in which they would attack without mercy, striking with fast-paced coordination, trying their best to ensure that Jack wouldn't have any time to respond or recover.

However, despite their training and numbers, they were only able to stand against Jack with surprise on their side; the Samurai finally overpowered them after a lengthy struggle. Furthermore, due to them spending their lives being trained in isolation, they possess little to no knowledge of the outside world, having never seen other animals such as a doe and assuming a stag was Aku's minion because of its antlers. Ashi in particular was intrigued by the outside world, but her mother refused to allow her to be distracted.

Ninjutsu: They are trained in the art of ninjutsu, each of the seven skilled with a different weapon.

Stealth: They are masters of stealth and camouflage. In the temple where Jack attempted to hide, they were able to beat him at his own game, vanishing into the shadows to ambush the samurai. However, they were not trained nor equipped for snow concealment, and Jack was able to outmatch them in a snowy forest.

Trap Masters: They are capable of creating effective traps.

Preternatural physical ability: During training, the seven sisters were able to run on a cliff as if they were running on a flat ground. They even manage to engage in a combat and slay the cultists while doing so. With just fists and kicks, Jack's set of armor was quickly smashed to pieces as though it was made of paper. During the battle with the orc army, Ashi single-handedly broke through their lines by using one of the soldiers as a battering ram and survived the battle with minor injuries. Amazingly after completely decimating the large army, Ashi still had enough stamina to not only immediately hold her own against her mother in combat, but to defeat her. It is possible that their physical ability is somewhat superhuman due to Aku's essence in them, even without having their true power unlocked.

Corrupted form: Since being the biological daughters of Aku, it is safe to say like Ashi, the rest of the members carry Aku's essence and as such they can be controlled and corrupted by Aku, gaining more powerful forms.

All seven sisters with masks on.

Five sisters running through the rain in pursuit of Jack.

The first to die by Jack's hands. This is also the first human to be killed by Jack.

The second to die by Jack's hands

The third to die by Jack's hands

The fourth to die by Jack's hands

The fifth to die by Jack's hands,

The sixth to die by Jack's hands

All seven sisters without masks. 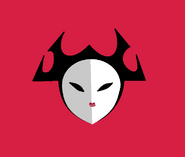 Add a photo to this gallery

Retrieved from "https://samuraijack.fandom.com/wiki/Daughters_of_Aku?oldid=27511"
Community content is available under CC-BY-SA unless otherwise noted.