Jack and the Zombies

Dust zombies appeared with glowing blue eyes, were based on beings other than just humans as some had alien-like features and on one occasion, and were somewhat primate-like in their movements. Dust zombies are fast and cunning creatures that advance on their target quickly. Despite being deadly, dust zombies were easily defeated, turning to dust after a single attack. The dust zombies are clad in rusty, spiked armor. They are armed with ancient, rusty swords and shields. There appeared to be a few variations of them beyond the standard weapon-wielding ones, including at least one that had extremely long arms with spiny talons for fingers. Another, banshee-like one called Hag Witch the Evil Spirit[1] was able to possess Jack's sword, pull it out of his grasp, and make it fly to Aku.

Since there was no longer a version Aku alive in the future to raise them, they presumably remained in their resting places. It is unknown how the past Aku's destruction otherwise affected their existence.

The Shadow of Aku

In later levels of Samurai Jack: The Shadow of Aku, Jack was forced to fight the Dust Zombies once again.

One of the locales Aku sent Jack to in the pocket he created between time was the Undead Cemetery. He raised the dead warriors there from their graves to fight Jack once again, and summoned Hag Witch the Evil Spirit to do so, which she did when Jack fought her as the boss of the end of the level. In later levels, Dust Zombies remained reoccurring enemies throughout the game, often as one of the many enemy types summoned by Demongo in his many subsequent boss fights. 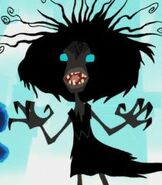 I WILL EAT YOUR SOUL!

Community content is available under CC-BY-SA unless otherwise noted.
Advertisement