This is the gallery for Episode XCVII.

"We won't let you hurt the Samurai!"

"Are you his friend?"

Jack in a flashback from the Woolies.

"Welcome to our home"

Aku in the Ravers' song

Jack vs Aku in the Ravers' song

Jack in the Ravers' song

"I must find him"

Astro with other dogs 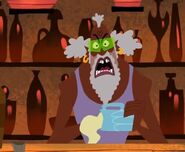 "It's tme to find my sword"

Voice Cast for Episode.XCVII
Add a photo to this gallery

We Will Never Forget You - Samurai Jack Full HD
Ashi meet Olivia and The official theme song for Samurai Jack
Add a photo to this gallery
Retrieved from "https://samuraijack.fandom.com/wiki/Episode_XCVII/Gallery?oldid=30669"
Community content is available under CC-BY-SA unless otherwise noted.