"Episode XXVI: Jack's Shoes"[1] is the twenty-sixth episode in the second season of Samurai Jack. This episode features Jack's geta, the wooden sandals he wears, being run over by a bike gang causing him to search for new footwear in order to fight effectively.

The episode begins with Jack relaxing by a stream, when a robotic biker gang almost run over him before he manages to jump out of the way. However, he quickly discovers that they had inadvertently destroyed his geta. After tracking them down and confronting them, Jack discovers that he cannot fight properly without any footwear due to the environment and the robo-bikers metallic armor. As the biker gang drives off, a kindly yet somewhat eccentric store owner, whom Jack had saved from the bikers earlier, offered him any type of footwear he wishes from the store.

Unfortunately, this led to some comical events, including spiked, armored boots that were too heavy to be practical, spiked heels that made him look too feminine, mechanical limbs that shut down if not attached to a power source, fish tank shoes that shattered after a few steps, furry boots made of small fuzzy creatures, sneakers that he ran right out with and then were stolen, roller skates which he had little control over, and inflated shoes that, when punctured, caused Jack to fly around uncontrollably before landing him in a crowd.

Luckily, this crowd is where Jack sees a young boy also wearing geta. Jack tries to ask the boy about his footwear but the child runs away. After following the boy into a jet repair shop, Jack meets the boy's father, a Japanese jet engine mechanic. The old man is honored to meet the famous samurai and invites Jack to dinner with his family. Jack is amazed to find the family's home greatly reminds him of ancient Japan. The father explains that they do their best to honor their ancestors by keeping the old traditions alive. The man's son and two daughters are greatly impressed by Jack, saying that they believe he will someday defeat Aku. The father tells Jack that if there is anything they can do to help him, he need only ask. Jack takes this opportunity to ask about his son's shoes. The kind, old man sets about crafting the sandals for Jack while the samurai shows his sword to the son, drinks tea with the parents, and signs an autograph for the daughters. Once the geta are finished, Jack thanks the old man with a traditional Japanese sugegasa he made earlier. Soon, Jack races off to face the biker gang, who don't seem quite so confident after seeing that Jack now possesses a new pair of sandals. 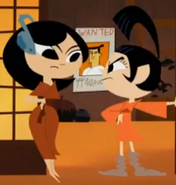 Add a photo to this gallery

Retrieved from "https://samuraijack.fandom.com/wiki/Episode_XXVI:_Jack%27s_Shoes?oldid=31488"
Community content is available under CC-BY-SA unless otherwise noted.