Samurai Jack is an American animated television series created by animator Genndy Tartakovsky that aired on Cartoon Network from 2001 to 2004. It is noted for its highly detailed, outline-free, masking-based animation, as well as for its cinematic style and pacing. It was the first Cartoon Network original series aside from those who comprised the Cartoon Cartoons lineup at the time. It is shown on its sister network Boomerang.

The plots of individual episodes range from dark and epic to light-hearted and comic, but typically follows Jack, a time-displaced samurai warrior, in his singular quest to find a method of traveling back in time. Many of the battle scenes in the series are reminiscent of samurai films, and since Jack's robotic enemies bleed oil or electricity and monsters and aliens bleed slime or goo, the series is able to exhibit the action of these films while avoiding censorship for violence.

Samurai Jack was available to be viewed by American residents via the Toonami Jetstream website. Production on the show was halted in 2004, but it was never officially ended. In return, Tartakovsky has announced plans to direct a theatrical film, but whether or not it will resolve the series has yet to be announced.

The feature film is currently in pre-production, and is being produced by J. J. Abrams' Bad Robot Productions and Frederator Films. However, the fate of a film is scrapped.

After over 11 years on hiatus, Samurai Jack is heading back to Cartoon Network next year. Adult Swim on their Facebook in December 2015 announced that Genndy Tartakovsky, the animator behind the acclaimed series as well as favorites like Dexter's Laboratory and the animated Star Wars: Clone Wars micro-series, is back to produce a new season that will land on Toonami in March 11th, 2017.

After being sent into the future by the evil wizard Aku, young samurai Jack makes a quest to return to the past and undo the destruction caused by the wizard. Along the way Jack enlists allies to defeat some of Aku's henchmen and other villains before getting to the top dog to defeat him and find the portal that can return Jack to his own time. 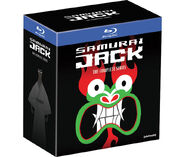 The Complete Series with Seasons 1 to 5 on Blu-Ray.
Community content is available under CC-BY-SA unless otherwise noted.
Advertisement