On December 2, 2015, Adult Swim announced that it would be airing a new season of Samurai Jack on its Toonami programming block. The fifth season of Samurai Jack will be the final season and will officially conclude the story with a proper ending. It also consists of the least amount of episodes; a total of ten as opposed to the usual thirteen.

Genndy Tartakovsky, the series' creator, returned as executive producer for this season.

Created by Genndy Tartakovsky, Samurai Jack originally aired on Cartoon Network from 2001 to 2004, comprising four seasons. The series was left open-ended since 2004. Tartakovsky previously expressed interest in a film adaptation of the series to provide a genuine conclusion, but the project never materialized.

Starting in 2014, reruns of Samurai Jack were aired on Toonami, an action-oriented programming block on Adult Swim. The network released a short teaser in December 2015 after it green-lit the return of the series with Genndy Tartakovsky as executive producer and Cartoon Network Studios as the season's production company. Artwork used in the teaser derived from the cover of an issue from IDW Publishing's comic book adaptation of the series. The new season received further mention ahead of the network's 2016 upfront press release. The fifth season was announced for the 2016–17 television season. Work-in-progress excerpts were shared at the 2016 Annecy International Animated Film Festival.

The season in its entirety released on DVD and Blu-Ray on October 17, 2017, making it the only season in the series to get a standalone Blu-Ray release.

The same day, a full-series box set, containing all 5 seasons was released on Blu-Ray. 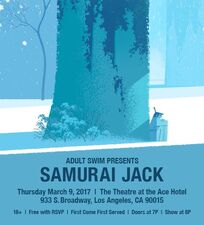