The Creature is an animal of unknown origin and unknown species that befriends Jack in the thirty-third episode, "Jack and the Creature". It is never actually named at all throughout the episode, and so is simply referred to as The Creature. Although usually peaceful, it becomes an entirely different animal when angered.

When docile, The Creature is at least three times as tall as Jack and resembles a large stuffed animal. Its body is very large and round, while its limbs look more like stubs. It has blue fur and a lighter blue belly. It is bipedal and makes numerous animal noises. It has three growths on the top of its head resembling shamrocks. These growths don't seem to smell very good, as flies almost constantly surround them. It also has enormous green eyes with long eyelashes, and a very feline nose. Its rear is peach-colored.

When angered, The Creature becomes even larger, towering over everything around it, and looks like a vicious monster. Its eyes become yellow with crazy spirals, its fur becomes brown-red and bristled, its formerly dull teeth become huge and sharp, and its limbs become monstrous claws. It now runs on all fours, and does not hesitate to kill anything that invoked its wrath. This lasts until it calms down.

The Creature almost immediately bonds with Jack, although this is one-sided. It follows Jack throughout the episode and is very friendly, although this annoys Jack more than anything. It is also very curious and seems to be rather child-like, often engaging in behaviors such as simply running back and forth for its own enjoyment repeatedly. Because it obviously likes Jack quite a bit, it does not hesitate to attack when Jack is being hurt.

The Creature is extremely fast and stealthy, especially when one considers its size. It was able to follow Jack without being seen, though Jack instinctively knew something was following him. It also has the ability to levitate and comprehends the English language enough to respond appropriately (or inappropriately usually) when Jack talks.

The Creature can transform when angered into a huge monster and is apparently much more stronger than usual. Here, it has lost any form of intelligence and simply attacks its aggressors until whatever angered it is no more. For some unknown reason, it seems to be angered even further than usual by an act of fear. When it saw the robot leader hiding, his face became twisted with hatred. Rather than crushing or slicing him, bringing him a relatively quick end, it chose to devour the robot leader, until none of it was left.

Jack finds The Creature in an oasis, mistaking it for a hill. He rests on its belly, awakening it. It immediately takes a liking to Jack, mimicking and licking him. As Jack leaves, The Creature follows him, but is not seen until Jack finds it in a forest. Jack is at first annoyed by it, because of its very clingy nature. He feeds it berries, but it asks for more food. Jack sets up a trap to kill a doe, but The Creature sets off the trap instead, being poked in its rear with a spear.

It continues following Jack, and helps him climb a mountain and find a crystal that will transport Jack home. Jack says his goodbyes, saddening the Creature, but before he can reach the crystal, hanging in the air, The Creature simply floats over to it and eats it. It is unknown if it ate the crystal intentionally to keep Jack, or simply because it liked the crystal.

Obviously, Jack is angered, and keeps The Creature away with angry glares, although it still follows him. He goes to sleep, and The Creature falls to sleep as well. When it awakes, Jack is nowhere to be found. It searches, but does not find him. It then barks for him, and seems afraid. It ultimately begins crying in his absence.

The Creature finds Jack again, this time being pummeled by four robots. At first it is frightened, but when Jack screams in pain it transforms into a gargantuan beast, and destroys all of the robots with little effort. It calms after this, and sees Jack unconscious. It thinks he is dead and cries loudly. Jack awakens, and thanks the Creature. Overjoyed, it hugs him tightly. Jack suggests they go forward to a village nearby, and the Creature runs off ahead of him into the sunset. It is unknown what happened to The Creature after this episode. 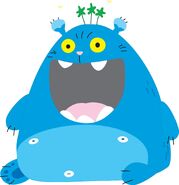 The Creature transforms into a gargantuan beast when anger

Retrieved from "https://samuraijack.fandom.com/wiki/The_Creature?oldid=8886"
Community content is available under CC-BY-SA unless otherwise noted.