As the Three Blind Archers

They all have black, slim human bodies, but have rat-like heads instead of a human's. Their eyes are completely white and their ears point straight up. Each of them is armed with a red bow and an unlimited amount of dark red arrows.

In their original forms

In their original forms, they have pale yellow skin, long necks and orb-shaped heads, as well as thick limbs, rectangular noses, and short fingers.

The Three Archers wear very little clothing, aside from their false beards (similar in style to those donned by Egyptian Pharaohs) and red loincloths.

After 50 years, the Three Archers have grown 5 o'clock shadows and have sashes.

The Archers were originally three human warriors. The warriors traveled to the Well of King Ozric hoping it would grant their wish to become the greatest warriors. It granted their wish, but robbed them of their sight, minds and free will, turning them into its rodent-like guardians. This was later discovered to be a trick by Aku to deceive those seeking the wish the well was supposed to give when claimed.

The Archers first appear when Samurai Jack tries to reach the tower, hoping the well at the top would help him go back in time. Before he could make his attempt, an army of Viking robots tried the same thing, but fell in a matter of seconds to the three mysterious Archers. Jack tried shortly after, but almost became a pin cushion several times. Before he fled, Jack discovered that they used their hearing and not their sight to find their targets. Jack learned how to use the same technique and managed to get past a shower of arrows and reach the top of the tower, only to be surrounded on all sides by the Archers. Just as they fired, Jack dodged all three, making the arrows collide, change direction, and hit each of the Archers, reverting them to their human forms and freeing them of the well. Just as Jack was going to use the well, the Archers stopped him and told him about how the well granted their wish, but at a terrible price. To make sure this didn't happen to anyone else, Jack destroyed the well and went on his way.

It is revealed in Episode XCVII that the archers are still alive when they ward off a group of spider-like drones. They question Ashi and introduce her to their village after she tells them she is an ally of Jack. They show her a statue of Jack they built and tell her the story of how he freed them. When they tell her they have not seen Jack since, Ashi leaves and continues her search.

In Episode CI the archers were among many of Jack's allies to come to his aid and save him from execution. They rode into battle atop the Woolies launching volleys of arrows at Aku. Several of their kin were corrupted by Aku and were forced to fight them.

After the past Aku's destruction, the three men were never enslaved by the Well of King Ozric since Aku never cursed it. Other than that, it's unknown how their existence was affected. 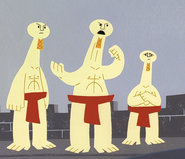 Retrieved from "https://samuraijack.fandom.com/wiki/Three_Blind_Archers?oldid=34152"
Community content is available under CC-BY-SA unless otherwise noted.